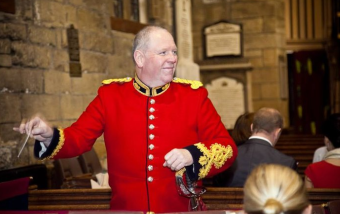 Simon Kerwin was brought up in Wigan, in the north west of England. He is a composer and arranger, who is known around the world.

He was only 12 years old when he began to learn to play the baritone. He then progressed onto learning the euphonium followed by the tuba. At the age of 17, he joined Wingates Brass Band.

Simon worked as a professional musician for many years and achieved an honours degree in Band Musicianship from Salford University. He majored in arranging, conducting, performance and also composing and studied with other great contemporary composers.

Highly sought after, most of his compositions and arrangements are commissions from bands, ensembles and publishers. Notable compositions for brass band include: Derby Central, Lady Victoria, Todmorden and his arrangement of Feeling Good. He even created his own version of Happy Birthday in 2017, to celebrate the tune coming into the public domain. He was the composer in residence for many great bands, like Yorkshire Building Society Band, Wingates and James Shepherd Versatile Brass Band.

Simon Kerwin has had in excess of an impressive 1000 pieces published and had notable success, with his arrangements and original compositions being played all around the world, recorded on CDs and even used on TV and films, such as The Full Monty and Brassed Off!

In addition to Wingates Band, he has also played in James Shepherd Versatile Brass and Britannia Building Society Band. He has also had success in contests, playing in 1996 with YBS in the performance that won the European Championships in Bergen. He was also the bandmaster for the Nottinghamshire Band of the Royal Engineers.

Furthermore, Simon was prolific as a solo performer in many places in Europe. His early ambition was to play with professional orchestras, which he fulfilled when he played with the Mancunian Hallè Orchestra. Between 1996 and 2000, he spent time in Scandinavia, where he worked as a freelance musician, conducting wind bands, choirs, orchestras and brass bands.

Simon was the musical director for Whitburn Band and his wife Alexandra also joined in March 2000 in the principal cornet seat. They moved to Scotland, where Simon worked with many Scottish choirs and bands, notably Shotts St Patrick’s Brass, where he was MD. He also was commercial manager for the Scottish Co-op Band and also played principal tuba for them.

Simon lived and worked in New Zealand for a time, including working with New Zealand's full-time professional symphony orchestra, the Auckland Philharmonia Orchestra as well as one of the finest brass bands in New Zealand, Waitakere Brass Band. He returned in 2007 to live in the UK.

Sadly, Simon Kerwin passed away on Wednesday 7th November 2018 in Leeds, aged 57, after a long illness.