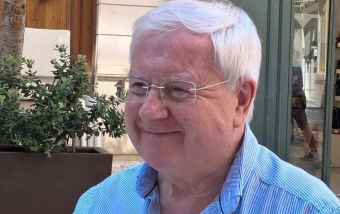 Rodney Stephen Newton was born in Birmingham, England on the 31st July 1945. His exceptional talent is various, with credits including composer, conductor, drummer, music educator and publisher.

Newton attended the Birmingham School of Music, as it was then called, where he learnt orchestra management, music theory, percussion and composition and was awarded diplomas. After leaving here, he was appointed percussionist between 1967 and 1969/70 at the BBC Orchestra. He also formed his own ensemble at this time called St Martin’s Lane Ensemble. Following this, in 1974, he moved to the English National Orchestra to take up the post of sub-principal percussionist, then co-principal percussionist and then principal timpanist, where he stayed until 1985 before going to the London Symphony Orchestra. In 1975, he received a commendation for his entry into the Prince Pierre of Monaco composers’ competition.

In 1983, he went to the London Film School and undertook a music course, where he gained a certificate for film music composition and music editing. In 1985, he attended Goldsmith College at the University of London and completed a shot course in film composition. Newton joined the workforce at United Music Publisher in 1979, as a promotions manager, where he remained until 1982. 6 years later, in October 1988, he joined the London Film School as a music consultant and principal lecturer in film music, where he remained until April 2010.

The early ‘90s saw Newton begin his involvement with British brass bands and orchestras/wind bands. In 1996, Rodney Newton gained a teaching post at the London College of Music, where he taught film music composition and composition and orchestration. Around this time, he became the arranger of music for the Williams Fairey Engineering Brass Band, where he also co-ordinated the music. He stayed there until 2004, when he moved on to Cory Brass Band.

As well as composing and arranging, between 2001 and 2010, he worked at the magazine British Bandsman, as its features editor, as well as for Prima Vista Music from 2006, as publisher.

Newton is a prolific and versatile composer, writing many symphonies, string quartets, vocal music, music for films, concerts for tuba, euphonium and flute, concert orchestras and many pieces for brass band. Not surprisingly, he belongs to the British Academy of Composers, Songwriters and Authors. Much of his music has also been recorded onto CDs. He has had much success as a composer of music for films and TV series. Notable works include: The Watch House, The Butterfly Effect, King David and The Living Isles. In 2018, he composed a new and unique version of Happy Birthday especially for Devilish Publishing to celebrate that this tune was now in the public domain.

Since July 2017, Rodney Newton has been an external examiner at the University of Salford and continues to be a freelance conductor, arranger, composer and music journalist.