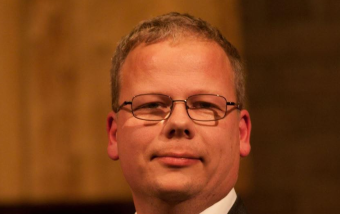 Magnus Hylander is a Swedish composer and arranger born in 1967. Living in Fristad, Magnus is a tuba player, who in addition to his composing duties, can also be found conducting. Magnus won our Devilish Award for Composition in 2008 with his fanfare for brass band, Sunrise.

Sunrise depicts the rising sun in the morning with a wistful melody, similar in style to Philip Sparke, and soon picks up in brilliant jubilance.

Magnus studied the tuba at the Malmö Academy of Music and played with the brass quintet Brassa Nova as their tuba player between 1992 and 1998. Over the years, he has composed and arranged many pieces, mostly for brass, but also for ensembles as well. Some of his works are recorded by Göteborg Brassband, Flesland Musikklag, BrassaNova, Band of the Malmö Fire Brigade, Borås Brassband and the Salvation Army Band, Lidköping.

Several years ago, he decided to concentrate more on the conducting and composing side of his life and stopped playing the tuba. He was formally a member of Göteborg Brass Band, playing Eb tuba for them for several years; they have since disbanded.

Magnus is currently working at a music school as a brass teacher. He is also conducting two bands.