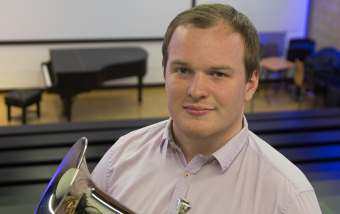 Jonathan Bates BMus (Hons), PGDip IAD is an arranger and composer, who was born in Huddersfield in West Yorkshire. He currently plays tenor horn for the championship section Foden's Brass Band.

Jonathan began his brass band career at Elland Silver Band, having first graduated from their youth band programme. He also has the accolade of being the youngest ever member of the National Youth Brass Band of Great Britain when he joined them just after turning 12 years old. While studying music at secondary school, Jonathan first began to take a keen interest in composing music, particularly duets for tenor horn, and began to make his mark on the world of brass.

In 2011, as part of his school studies, he produced his first major work, the test piece Within the Paths of Righteousness with the National Youth Brass Band of Great Britain giving it its first performance later that year. Success continued when two further pieces of Jonathan's were premiered just a year later. He submitted a piece entitled Romani Fire Dance for a composer's competition, where he won. During this busy time, success came for him as a respected performer too, when in 2012 he appeared on the televised final of BBC Young Musician of the Year, becoming only the second player ever of a tenor horn to reach this category final.

From these early compositions, Jonathan Bates has progressed to compose for world class bands and soloists, such as Grimethorpe Colliery Band, Black Dyke, Leyland Band and the euphonium soloist David Childs, to name a few. His music has also been used in many championship contests such as the UK Regionals and Nationals, World Championships and notable events around the world, in such glorious venues as the Royal Albert Hall and The Sage.

Jonathan's credits are numerous, winning competitions such as the Katie Ogden and Harry Mortimer Solo Awards and the Harold & Bernard Tovey Memorial Award for Outstanding Musical Contribution. He also appeared at the BBC Proms. Furthermore, he has played for some of the most outstanding brass bands in the world, notably Grimethorpe Colliery, Black Dyke and Brighouse and Rastrick Bands.

Success came for Jonathan Bates with his educational studies also. He completed an extended Diploma in Classical Music from Leeds College of Music and then proceeded to earn a place at the Royal Northern College of Music studying Performance and Composition. Here, he won the prize for Big Band Composition, then graduated with a first-class honours degree in 2017. He continued with his studies by achieving a Postgraduate International Artist's Diploma in Chamber Music. He is also a member of the renowned A4 Brass Quartet, achieving notable success appearing on BBC Radio 3 and ITV and winning many awards, such as the Christopher Rowland Ensemble of the Year, the Royal Overseas League Chamber Music Competition, the Royal Philharmonic Society Henderson Award and the Philip Jones Brass Ensemble Prize.

To this day, Jonathan Bates continues to dedicate much of his time to composing new pieces of music for brass band as well as being a Performance and Development Artist for Geneva Instruments and a K&G Mouthpiece Artist.