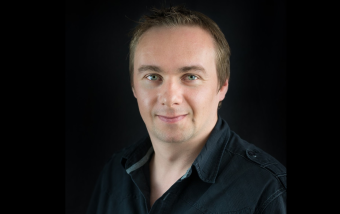 James McFadyen was born in Kirkcaldy in Scotland in June 1980, but now lives just outside the historic city of York. As a prolific composer and arranger for brass band, James' music has been used on radio broadcasts, recordings, concert performances as well as being featured on the contest stage.

A unique compositional voice of light music, his style is fuelled by a broad experience in music within classical, jazz and electronic dance music genres, making James' music a subtle crossover hybrid of different influences.

Despite largely writing for the concert platform, James' music is tinged with dark sounds, often employing thick and heavy textures, and despite this, most of his best-known works are high-octane solo works that pack a punch.

James' arrangements are not usually utilitarian in style, they are instead complete recreations, often spinning the original on its head. Notable arrangements include Clair de Lune, Singin' in the Rain and Camptown Races. His most recent arrangement of the popular hymn tune Crimond is also a particular point to note.

Although most of his published output is written for brass band, James has written for a varied range of instrumental forces, including the symphony orchestra.

Alongside his composition specialism, James plays Soprano Cornet with Shepherd Group Concert Brass Band in York and regularly can be found as a guest player around the York and East Riding areas. In his youth, James played trumpet and was a long-standing member of the Fife Youth Jazz Orchestra from 1995-2002, serving as lead trumpet for the vast majority of the term.


James' current projects include a cornet concerto and numerous original works for band.