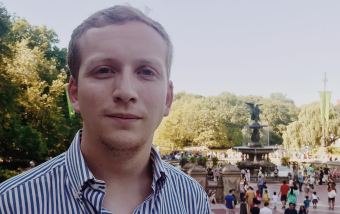 Edward Mylechreest was born in 1991 in London. He is a conductor, composer and arranger.

He was raised under the influence of the Salvation Army, so was surrounded by music. Through deciding to study music at school, he started writing short pieces of music at 14 years of age for his coursework and has continued ever since. At only 15, he began conducting. He conducted the Bournemouth Grammar School concert band. They played Edward’s arrangement of 633 Squadron. Edward began playing the cornet when he was young, but is also a skilled trombone player, having achieved his Grade 8 in trombone at 16 years old.

Edward Mylechreest was also bandmaster for Romford Young Persons Band, Romford Salvation Army Band as well as being involved with many ensembles at London North East Divisional Brass Band and the Tiffin School, where he taught music from 2013 until 2016.

Other notable credits are being the Musical Director (MD) in 2010 for the play Henry V, and in 2011, the musicals Jekyll and Hyde and The Drowsy Chaperone, as well as supporting the MD with Les Miserables, West Side Story and Bugsy Malone.

February 2012 saw Edward first being published worldwide. His composition was called Easter Jubilation. Siya Kuda Misa swiftly followed. This is a vocal work that was part of the Sing to the Lord Children’s Voices March journal in 2012. Edward is also a very skilled arranger, arranging in 2015, I’m Forever Blowing Bubbles, I vow to Thee My Country and Oh When The Saints.

A very active musician, he is always keen to get involved with musical challenges and is a great support and inspiration to those he works with. He often gets commissioned to compose music for ensembles and bands as well as for other celebrations and weddings. He has performed around the world. He has been a member of many bands and orchestras, such as Apollo Sinfonia, Salvation Brass, Birmingham Citadel Band, In The Pink Big Band and the Wessex Youth Orchestra to name but a few.

Edward has performed in some of the most spectacular places in the world, such as the Festival Hall in London, Symphony Hall in Birmingham, the Royal Albert Hall in London, Buckingham Palace and the Hammer Hall in Melbourne. In May 2016, he was appointed Regional Music Leader for the Salvation Army Greater New York Division, where he currently resides.