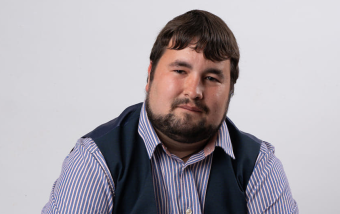 Bronco Hutchings is a Somerset based professional musician. He has worked with a lot of professional bands, such as The Yetties and The Bog Dogs, where he was the resident Fiddle player and Accordionist. He is currently playing professionally on Euphonium within the band Ship of Fools, which performs on the circuit across the South West of England. Bronco also plays Euphonium within the Stoke Sub Hamdon Band and the Yeovil Salvation Army Band.

Within Bronco Hutchings active time within the music industry he taught an award winning music course in Composition at the Somerset Performing Arts Library where he was the Course Leader and Creator of the Composers and Arrangers Group. Bronco also held the fantastic Folkestra which Peter Shutler (The Yetties Accordionist) which was a 45 player strong ensemble including Brass, Strings and all Folk orientated instruments. Bronco also taught in the Somerset area as a Strings and Brass teacher within schools and the Yeovil Music Centre.

An established session musician, Bronco has worked with some amazing artists but one being Gary Shail (Spider from Quadrophenia), where he played Viola, Violin and Brass on his album. Gary Shail then went on to be the producer for Bronco with his instrumental album called The Bronco Hutchings Album. The album was signed to AB Records where he has had radio plays all around the world, his last radio play was in Australia with the track Dance of the Hempen Jig.

Bronco has had a strong passion for Brass Band composition since he was 18 years old, since then he has been published by several music publishers, joining Devilish Publishing in early 2022. He was a score editor for Lakes Music Publications and learnt a lot about the publishing world. Within Broncos compositions and arrangements his deep passion for folk music comes out using a lot of different modes and folky tricks.

Bronco is still teaching music and working on folky compositions whilst playing in Ship of Fools with his Euphonium.